The Philomath Frolic & Rodeo Queen serves as an ambassador of the rodeo and the entire Philomath community as she travels throughout the Northwest promoting our heritage, rodeo and the western way of life. The Queen's term is from January 1st through December 31st, and the next year’s queen is selected during tryouts each Fall. 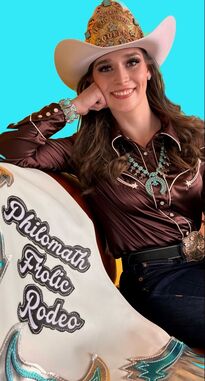 Corbie Johnson is proud to represent the Philomath Frolic & Rodeo this year as your 2022 Queen.  Corbie was selected from a group of four candidates at the tryouts on October 2, 2021.  She won the Knowledge, Personality, Appearance and Photogenic categories, ultimately walking away with the crown as well.  Below are a few words from Corbie.
"It’s officially rodeo season which means it’s officially time to introduce myself.

My name is Corbie Johnson and I am your 2022 Philomath Frolic and Rodeo Queen. I moved to Philomath in 2017 to further my education at Oregon State University and this June I will have done just that and will be graduating with a Master’s in Athletic Training. Originally from Elmira, Oregon, in high school, I competed on the Oregon High School Equestrian Team and ran in track. I have been riding horses since I was a mere two years old and haven’t been able to pull myself away. My horse Duke, who I will be riding this year, is a 22 year old paint and still the best horse I’ve ever known. He loves meeting little cowboys and cowgirls almost as much as he likes doing a run-in at a rodeo. We are both so excited for this next adventure and can’t wait to see you at the Frolic one month from now!"

-Corbie Johnson
2022 Philomath Frolic & Rodeo Queen
Philomath Frolic & Rodeo Queen tryouts will be held each Fall.  This year it will be September 3rd!
We will post information about the tryouts after the rodeo on this page, our Facebook and our TikTok pages.
​For more information and an application please contact our Queen Advisor Leanna Buck at: frolic.leannab@gmail.com